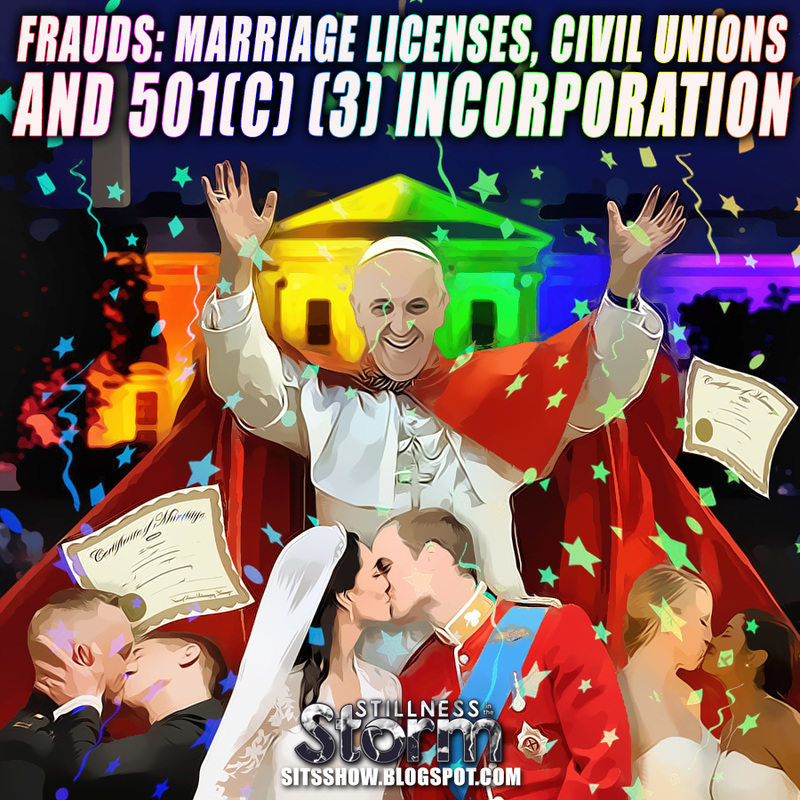 Wait a Moment…. “How can it be illegal for people to get married?”

With the recent Supreme Court decision, stating gay marriage is not unconstitutional, many are cheering at what could be thought of as a granting of liberties.

But is there something more insidious at work?
What is a Marriage License or Civil Union within a legal framework?

Generally speaking something that is Legal is simply a government codification. The ritual of getting married did not need government intervention prior to the 1930's, a couple could get married in any way they liked, the big issue is getting that union of souls recognized by some 'authority' - enter the gay marriage issue. Gays, Lesbians and Transsexuals have not been able to receive the same treatment, under the authoritarian and societal systems, as heterosexuals. This leads many to conclude, getting permission from government imparted them with some rights they did not have before, but is this true? No.

Any time you acquire a marriage license, you are literally marrying two different entities; your partner and the State. Because we are presumed to be incompetent, assets for the government - chattel, any product of that marriage can be claimed by the State; assets, property and even children in the form of birth certificates.

Judge Anna describes this and more within the below post, detailing why getting State sanctioned approval for marriage, a license, is another fraud pushed on the unwitting public. And this particular issue of gay marriage highlights the Cabals mastery of swaying public opinion. Imagine if we were told that getting a license for marriage and registering that with the State, means giving up our sons and daughters to the system, that everything generated through a union is pledged to the State, to use as they see fit? Many people would scoff at that notion, and this reveals two key points.

One, that our consent of the control system keeps it going, and two that our would-be masters are in breach of trust, by way of manipulation and deception. All that humanity needs to do is realize this and act to dethrone these illegitimate authorities, the so called citizens arrest scenario. While also seeking to master ourselves, becoming independent, self governing and competent people once again.

Birth & Marriage Certificates Scam : Corporations make bonds with them : You are money : Meet your Strawman?

For the past eight decades Americans have been coerced under duress to obtain “marriage licenses” resulting in “civil marriages”. By definition, a “license” is permission to do something that would otherwise be illegal….

So ask yourself: “How can it be illegal for people to get married?”

If you are Joe Schmoe born on the land of the Missouri State and standing on your own two feet—and you have a marriage license— you’ve been press-ganged into the foreign international jurisdiction of the Federal United States and forced to comply with their laws under conditions of purposeful self-interested semantic deceit, non-disclosure, and disinformation.

Continental United States Citizens have always recorded marriages with their Churches or with the Justices of the Peace. Recording is simply a public record of their marriage agreement. It remains a private social and religious obligation in which the State has no enforcement interest.
Registration, however, is the transfer of a commercial ownership interest in the marriage, (or automobile, or whatever else is being registered) and in the 1920’s the Federal United States began requiring their Citizens to “register marriages”.

The reassurance often given by ignorant clergymen that this was a “government mandate” (with no mention or knowledge that two separate “governments” were involved) was sufficient to play upon the trusting Americans and so, we have been entrapped in undisclosed commercial contracts known as “civil marriages”.

Civil marriages unlike sacramental marriages are commercial contracts in which the State assumes a controlling interest in the partnership being formed and in the “products” of the partnership—- that is, your jointly owned estate, home, businesses, vehicles, and, most importantly, your children. Everything becomes subject to the whims of the Federal “State of State” and its in-house corporate executive administrators known euphemistically as “Judges” because you were duped into signing a civil marriage contract.

This is the basis of so-called “divorce settlements” and “custody hearings” and “mandatory child support” and all the other ugliness and unreasoning blasphemous intrusion that goes on in “Family Court”.

Ask yourself— when did your sex life and family relationships become subject to any interference from the government? When did you give them permission to pass judgment on you, distribute your private property, steal your children, or otherwise treat you and your estate as chattel belonging to them?

Answer: you let these interlopers into your life by misplacing your confidence in them and blindly obeying what was misrepresented as a “government mandate”or “law” or “requirement” that you had to obey in order to be married.

To make this swindle possible the Churches have had to abdicate their responsibility and the perpetrators have had to pretend that they are not making these claims against actual people-- because that would be kidnapping and slavery and violation of basic human and civil rights—- so they commit personage instead.

NOTICE: If all you have is a “civil marriage” you are not truly married in any religious or social sense at all. You are—- guaranteed and for a fact— living in sin.

You are in a profane three-way business contract in which a “State of State” calling itself something like “State of Ohio” claims a controlling interest—- the same as if you and Joe (or Josephine) opened up a hot dog stand and handed the keys to a bureaucrat, only instead of a hot dog machine and some buns being at risk, it’s everything and everyone you care about being seized upon by these animals in suits and robes.

That being so, you can now see why the “United States Supreme Court” acted as it has on the issue of “gay marriage”.

After all—- what difference does it make if two “homosexual” public transmitting utilities get “married”? Or two gay constructive estate trusts? —Or a couple flaming lesbian foundations?
Are you laughing yet? It’s funny in a perverse way…. Everyone is all upset and excited and hopping around— over something ridiculous.

The whole concept of marriage in terms of living people is not affected by a “civil marriage”—-which is the only kind of “marriage” any governmental service corporation can offer.

From the standpoint of the Federal Corporation and the Federal “State of State” franchises, opening up civil marriages to homosexuals is good business. It gives them an excuse to claim control of the private property assets of homosexuals the same way they claim control of the assets of anyone else unfortunate enough to have a “civil marriage” contract.

Of course, the Federal “State”— has to “recognize” civil marriage contracts as being “valid” because otherwise, they couldn’t charge you child support, tax you, divide your property assets, decide custody of your children, harass you, seize your children, fine you for late payments or any of the other juicy revenue and coercive control they enjoy because of this scam.

So you can all stop being outraged by “gay marriage” and start feeling sorry for the poor confused half-naked rainbow-beribboned sots.

They are mistaking a corporate power grab to claim their assets as “marriage” and the (Federal) United States Supreme Court is greedy enough to let them make the mistake everyone else has been making for 80 years. Justice Kennedy et alia are laughing all the way to the bank, while Antonin Scalia has proven himself to be the only actual jurist in the bunch.

Ask yourself—- What does a business contract have to do with “marriage”?

Repeat after me: Nothing. Nothing at all. It’s just another fraud game. It is nothing but more self-interested semantic deceit from these British-controlled lie-mongers. They’ve got everyone’s knickers in a knot and all the gays out parading in the streets and it is nothing but another revenue scheme.

Now here is the other sad part of the story --

Churches have been the cause of their own demise. They have signed up and incorporated themselves by the droves, claiming to be “non-profit” 201 (c) (3) or 501 (c) (3) corporations, all to avoid paying income and property taxes.
Here’s the kicker:

If they never incorporated to begin with, they could never owe any of these taxes, which only accrue against incorporated entities by definition.

All these Churches went through all the trouble to incorporate and claim “tax benefits” related to taxes they didn’t ever owe as unincorporated fellowships, and in the process put themselves in a position where they could be threatened with the “loss” of the “tax exemptions” that never naturally applied to them in the first place.

Can you say Dumb and Dumber?

It’s another one of those things that is almost funny. Like selling Florida Real Estate that is underwater nine months of the year, the Churches have been sold “tax exemptions” that they don’t need as long as they don’t incorporate and don’t file taxes as corporations and don’t keep state-approved records and don’t let “State” franchises bully them.

If they all simply liquidated their corporations en masse and told the Federales to get out of the Church’s business, they would be miles ahead economically and politically and spiritually.

As it is, they have to do all the social service work they did before and stand by silent and fearful while the Federal “State” franchises interfere with their programs and crack the whip over their heads and compete against holy sacraments with self-interested business contracts merely called “marriages”.

The Church’s legitimate business— sacraments, belief, faith, ethics, moral values— are being undermined and destroyed because of misplaced greed. The Churches have given away control of their own destiny and conscience for the sake of avoiding taxes they wouldn’t owe if they simply dissolved or never adopted incorporated status to begin with.

They could also claim considerable relief by accessing the remedy that was provided in the offending regulations: (See 508(c)(1)(A) Free Church vs. 501(c)(3) State Church

Until the Churches wake up and realize how they have been snookered by these British-flim-flams and coerced under color of law, they will continue to see families destroyed, good people harmed, and their own self-respect eroded. The powers of criminality, deceit, self-interest, immorality, and evil will continue to gain ground until the Churches foreswear Mammon and exert themselves as living fellowships.