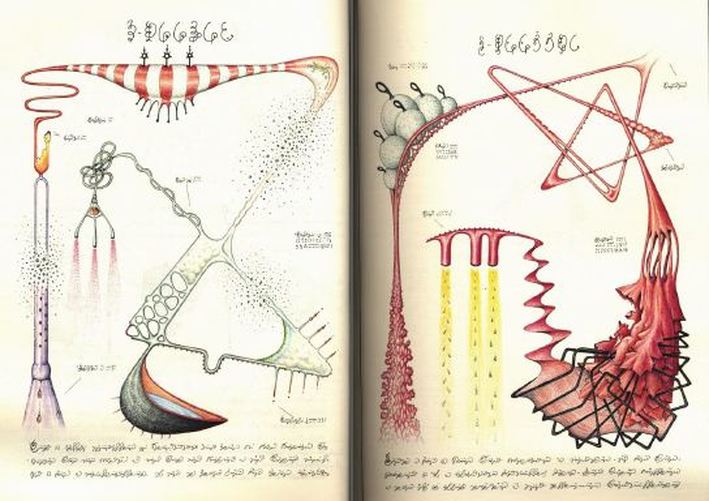 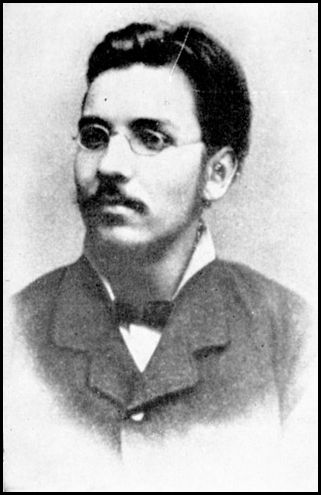 Voynich was a well known New York book dealer, specialising in early and rare books. Having fled Siberian incarceration to London (for attempting to liberate fellow Russian revolutionaries), he quickly changed his name to Wilfred and soon after opened his first bookstore in England.

He eventually moved his business interests to the American East Coast. In and of the times, Voynich was unremarkable among his fellow immigrants and book traders; until, that is, he acquired a very special manuscript in a secret deal with the mysterious and ancient order of Jesuits, also known as the "Society of Jesus."

Voynich acquired his famous "Voynich Manuscript" from the Jesuits' Ghislieri College at the patrician villa known as Villa Mondragone in Frascati, Italy (now a peripheral seat of the University of Rome Tor Vergata).

Since that lucky find, the manuscript remained in Voynich's personal library until his death in 1930, when it was briefly decreed to his beloved wife.

Following his death there was a bidding frenzy for the manuscript, but the Widow Voynich held steady and herself decreed the book to a close friend upon her own death.

Eventually the manuscript was sold to another well known book dealer named Hans P. Kraus, who, then unable to find a suitable buyer, donated the book to the Yale University Museum in 1969.

The Voynich Manuscript, as it's now commonly called,
​is one of the rarest wonders of the modern world.

It is a book that quite literally should not exist.

To call it a book is somewhat misleading, for it, as with most ancient manuscripts,
resembles nothing of a book as you might know it 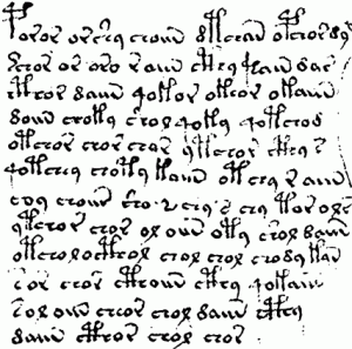 It is a collection of some 272 vellum pages (the skin of a mammal, often cow, stretched and dried to be used as a durable paper), 240 pages of which have survived the many handlings, transfers and inspections the book has encountered over the years.

The origins of the book are almost as interesting and mysterious as its contents. Many scholars believe the book was written, by quill pen and using coloured paint, at some point in the mid 15th or 16th centuries. By who is a completely different story, and the controversy over the authors identity is strongly connected to the mystery of the manuscripts contents.

The information contained in the book is largely unknown, and this is due completely, to the fact that the Voynich Manuscript is written in an entirely unknown and undecipherable language.
The surviving 240 pages, made up of some 170,000 discreet written characters or glyphs, making up 35,000 separate words, are accompanied by artfully crafted sketches and drawings, many of which are equally mysterious.

A large number of the sketches resemble known plant species, with subtle, and sometime drastic differences, others resemble complex aqueduct drawings and even anatomical type depictions of people (usually women).

The manuscript has been examined by no less than an army of cryptologists, linguists and a host of other scholars, including biblical scholars, and none of the countless hands and minds of these learned friends has ever been able to decipher a single word.

Very early on in the known existence of the book, several historians and cryptologists confirmed that the text in the manuscript is that of a learnable language, it holds with all the known rules and constructs of modern and ancient languages and quite often the sketches seem to correspond with titles and descriptions.

In modern examination, most, if not all, experts continue to agree on this as fact.Of course, with such a mysterious find in the hands of so many people, theories abound about the books origins.

The earliest known owner of the book was one Georg Barech, an obscure alchemist from Prague, in the early 17th century.

Theories content that Barech may have fabricated the book as a test for his patron. Others suggest that it was Voynich himself who fabricated both the book and the story, though evidence does exist to refute this claim.

Some claim that the book is the product of a lost middle European language, and that the book is a medical (or alchemist) instructional tome. Though some of the wilder claims cite both alien influence and even time travel.

The connection to the Society of Jesus and the Villa Mondragone might even suggest a Masonic origin to the manuscript, tying its information to the Knights Templar and the so-called secret knowledge they possessed, as passed down from King Solomon.

The truth is, no one alive has the ability to read or decipher the huge amount of information contained in this 600 (or so) year old book. It could possibly provide instructions for turning lead into gold, or it could be an interstellar gardening guide, or even still, it could be an early medieval alchemical textbook. Nonetheless, the Voynich Manuscript remains one of the oldest mysteries of modern history.

Experts are in total disagreement about its origin and meaning, and thus, it will hold its place in the Yale Museum, as The Book That Shouldn't Exist.

The Voynich Manuscript is written in an unknown alphabet. Not a living soul knows what it means. During centuries top military code-breakers, linguists, historians and laymen have tried to decipher it, all failed.

People have gone insane in their obsessions trying to figure it out. It dates back to the early 15th century. Enjoy the meticulous illustrations of botanical fantasies.

As The Voynich Manuscript it is written in Italy in an incomprehensible language with a made for the occasion set of characters.

The Voynich Manuscript is written in an unknown alphabet. During centuries top military code-breakers, linguists, historians and laymen have tried to decipher it, all failed. 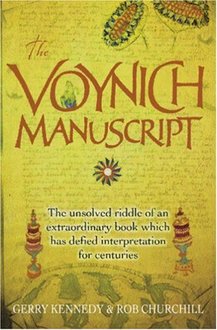 A mysterious, undeciphered manuscript dating to the 15th or 16th century.

Written in Central Europe at the end of the 15th or during the 16th century, the origin, language, and date of the Voynich Manuscript—named after the Polish-American antiquarian bookseller, Wilfrid M. Voynich, who acquired it in 1912—are still being debated as vigorously as its puzzling drawings and undeciphered text.

Described as a magical or scientific text, nearly every page contains botanical, figurative, and scientific drawings of a provincial but lively character, drawn in ink with vibrant washes in various shades of green, brown, yellow, blue, and red.

Based on the subject matter of the drawings, the contents of the manuscript falls into six sections: 1) botanicals containing drawings of 113 unidentified plant species; 2) astronomical and astrological drawings including astral charts with radiating circles, suns and moons,

Zodiac symbols such as fish (Pisces), a bull (Taurus), and an archer (Sagittarius), nude females emerging from pipes or chimneys, and courtly figures; 3) a biological section containing a myriad of drawings of miniature female nudes, most with swelled abdomens, immersed or wading in fluids and oddly interacting with interconnecting tubes and capsules; 4) an elaborate array of nine cosmological medallions, many drawn across several folded folios and depicting possible geographical forms; 5) pharmaceutical drawings of over 100 different species of medicinal herbs and roots portrayed with jars or vessels in red, blue, or green, and 6) continuous pages of text, possibly recipes, with star-like flowers marking each entry in the margins.

For a complete physical description and foliation, including missing leaves, see the Voynich catalog record.

History of the Collection

Like its contents, the history of ownership of the Voynich manuscript is contested and filled with some gaps. The codex belonged to Emperor Rudolph II of Germany (Holy Roman Emperor, 1576-1612), who purchased it for 600 gold ducats and believed that it was the work of Roger Bacon. It is very likely that Emperor Rudolph acquired the manuscript from the English astrologer John Dee (1527-1608).

Dee apparently owned the manuscript along with a number of other Roger Bacon manuscripts. In addition, Dee stated that he had 630 ducats in October 1586, and his son noted that Dee, while in Bohemia, owned "a booke...containing nothing butt Hieroglyphicks, which booke his father bestowed much time upon: but I could not heare that hee could make it out."

Emperor Rudolph seems to have given the manuscript to Jacobus Horcicky de Tepenecz (d. 1622), an exchange based on the inscription visible only with ultraviolet light on folio 1r which reads: "Jacobi de Tepenecz."

Johannes Marcus Marci of Cronland presented the book to Athanasius Kircher (1601-1680) in 1666. In 1912, Wilfred M. Voynich purchased the manuscript from the Jesuit College at Frascati near Rome. In 1969, the codex was given to the Beinecke Library by H. P. Kraus, who had purchased it from the estate of Ethel Voynich, Wilfrid Voynich's widow.

Goldstone, Lawrence and Nancy Goldstone. 2005. The Friar and the Cipher: Roger Bacon and the Unsolved Mystery of the Most Unusual Manuscript in the World. New York: Doubleday. 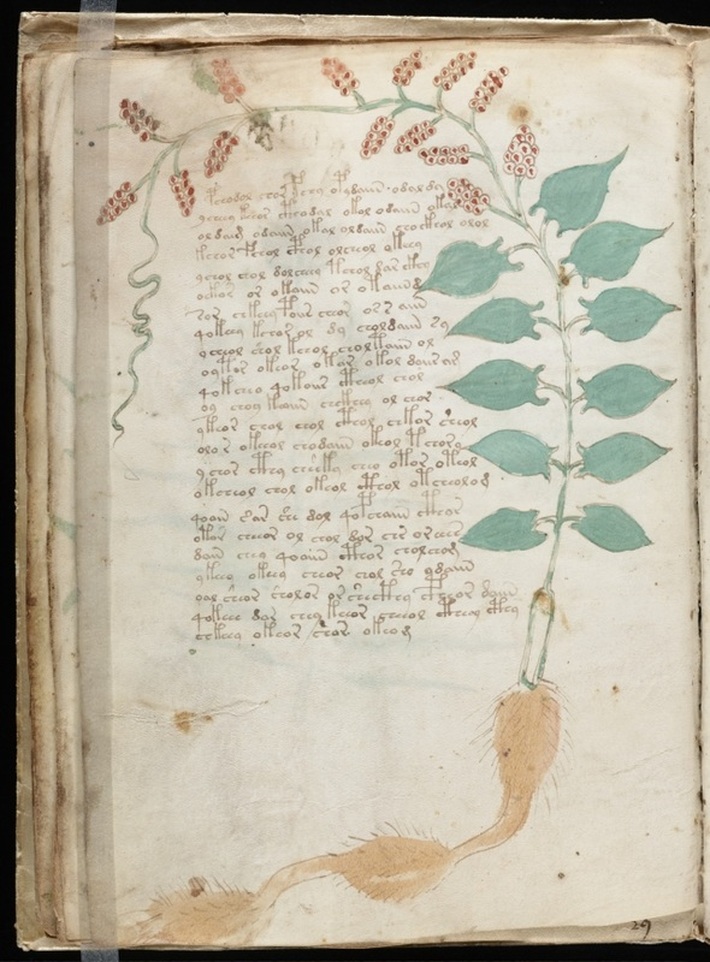 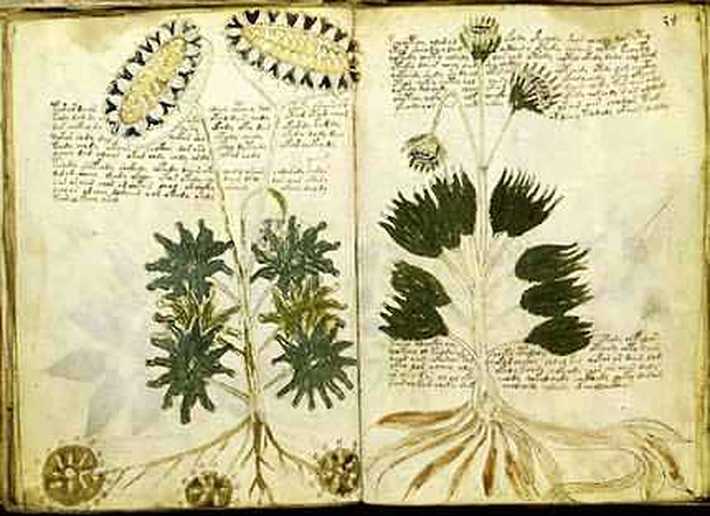 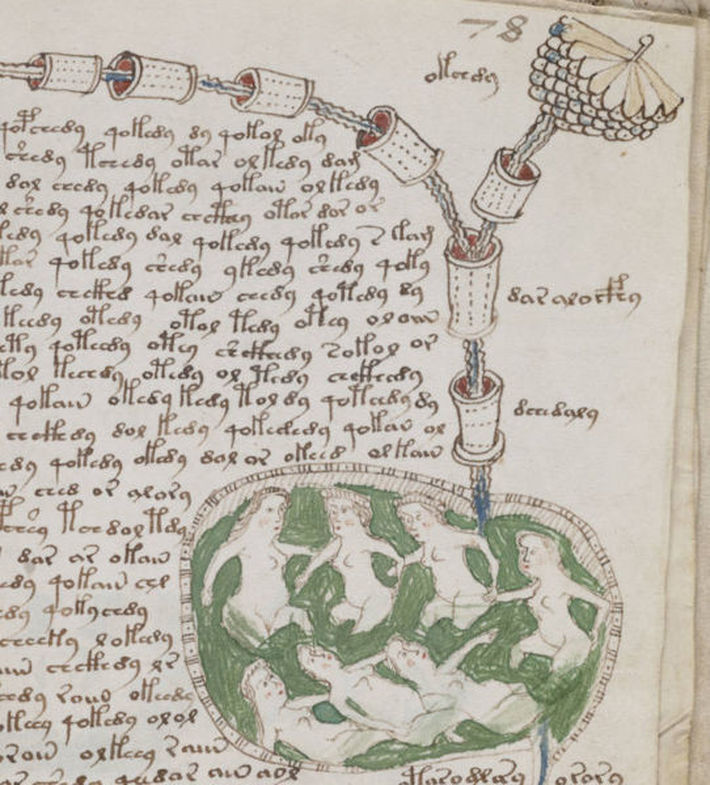 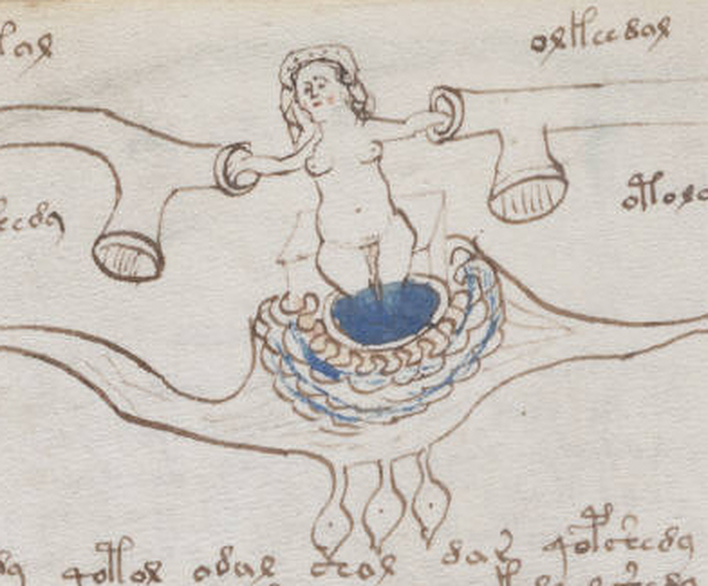 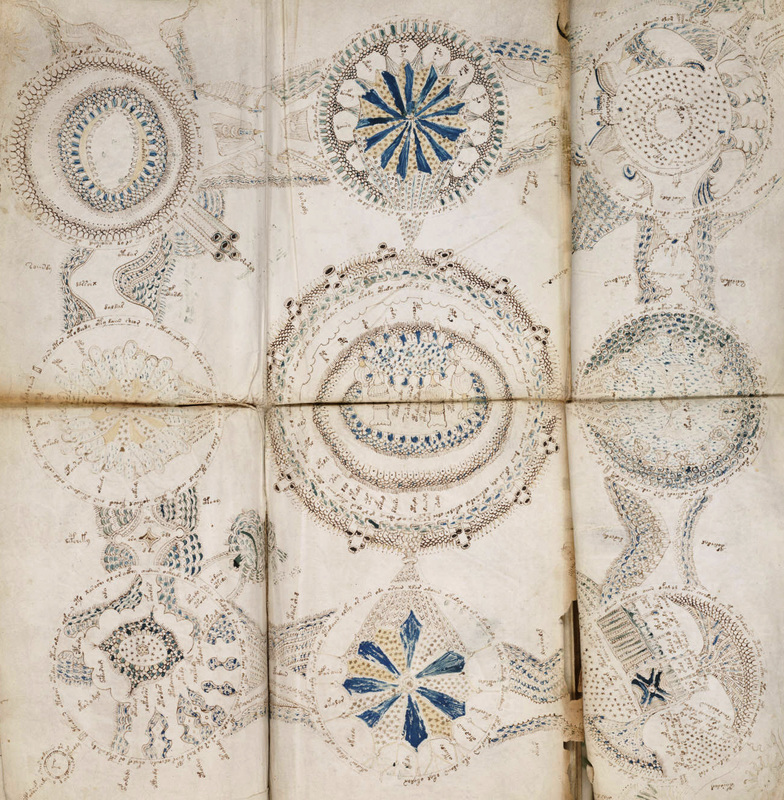 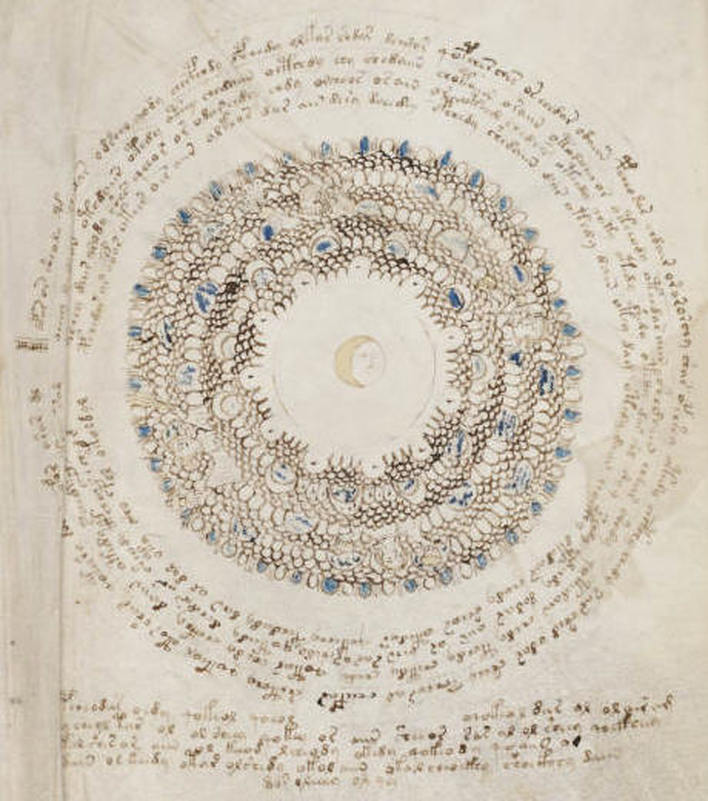 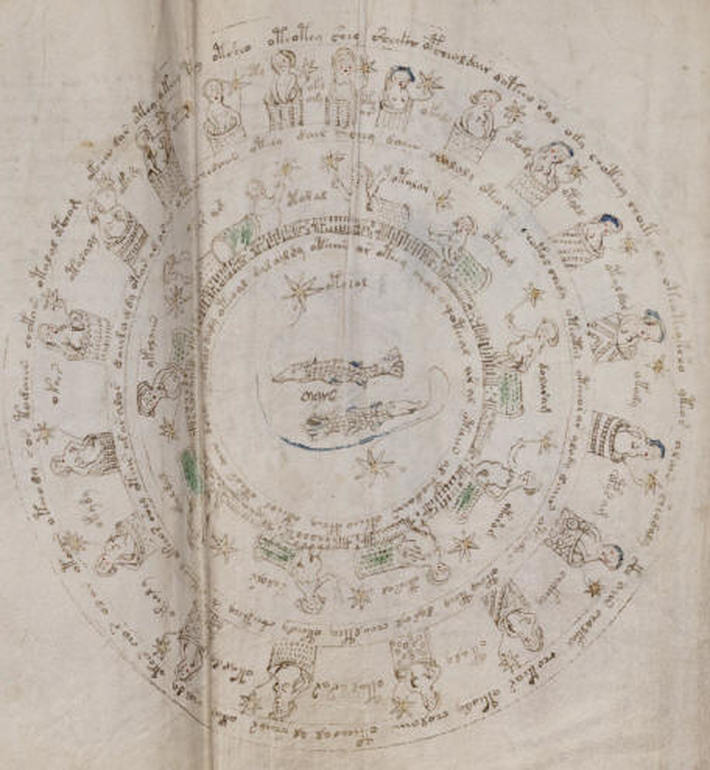