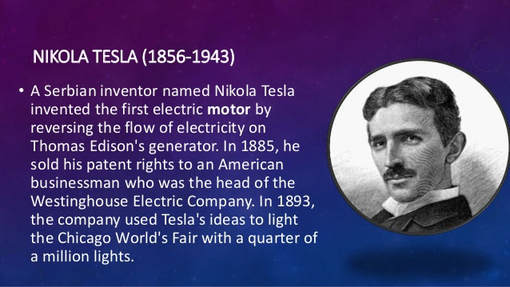 ​This Video is about a company that is producing free electric for use miles away.

It is right now in TX ... with no wires ... over air... originally designed by Nicola Tesla.

They dismantled Tesla's original tower in the early 1900's ... after he was killed.

They did not want the people to have free electricity.

This company is tied to the US military,

so it is very doubtful that this technology is for the people.

“The day science begins to study non-physical phenomena,
it will make more progress in one decade
than in all the previous centuries of its existence”

IN BRIEF
​
Is it possible to transmit electricity wirelessly? Some claim yes, that this type of technology was not only utilized in ancient times, like in Egypt for example but also by 19th-century scientists and mystic Nikola Tesla.
​
Although Tesla has become quite a popular historical figure, despite being left out of secondary and post-secondary education books, and work being seized by U.S. intelligence agencies. Furthermore, there are other explanations for a complete silencing of Tesla’s work, the monopoly J.P Morgan had the copper used to make electrical wires, for example.

With all that being said, Tesla’s vision of free and wireless energy transfer that could be converted into electricity is still known by many. Tesla wanted to use the wheelwork of nature to create energy, today, we do it by smashing things together and trying to create an explosion. Tesla gave us electric motors, which eventually turned into electric cars, and again, his visions hopes, theory and possible completion of a technology that was able to send electricity through the air.

People are still trying to make this vision a reality today, and if you drive down Interstate-35 on the road to Dallas, you’ll see it for yourself, it’s a strange looking tower that resembles Tesla’s Wardenclyffe and according to Michael Taylor of Viziv Technologies, the company behind the tower, they’re “focusing early-on, on continuous signalling, things like regional GPS, radio navigation and broadcast signaling.”

The company currently has a partnership with the Baylor University Research and Innovation Collaborative to help explore the applications of their technology.

Over the last 100 years scientists have been trying to figure out how to transport energy around the globe without cables and wires, and again, perhaps it’s an ancient practice/ability, but according to the website of Viziv Technologies, “the search is over.” Although we already knew this was possible via Tesla’s work.

Low-frequency surface waves can propagate around the Globe from a single location with an until-now unachievable efficiency…Our surface wave technology has wide-ranging applications for communications, navigation, and energy delivery…Clean, safe and reliable, wireless power will bring valuable resources to parts of the world that don’t have consistent access to necessities like potable water and life-saving medical treatment.

Their technology is made up of a wave system that allows the Earth itself to be used for clean, safe and efficient transfer of power between any two points on the global, wirelessly. These would be low-frequency waves, not like the EMF waves that come from 5G cell towers, or wireless internet routers, for example. This technology only uses surface waves, and not ground waves which are radiated waves.

The Federal Communications Commission (FCC), the Occupational Safety and Health Administration (OSHA) and the American National Standard Institute (ANSI) have strict guidelines for RF exposure levels. These standards have been in place for decades. Those limits are more than ten times what will be produced by commercial Viziv surface wave systems.

The system will use a “transmitter probe,” that’s what you see in the picture, and is located near a power generation plant in order to launch the Zenneck carrier wave. The receiver antennae will be placed all over the world.

The wave is named after Jonathan Zenneck (1871-1959), he was one of the first known scientists to study electromagnetic wave propagation over the surface of the Earth.

Viziv Technologies has a portfolio of over 60 U.S. and international granted patents. Additional patent applications are in development and more are expected.


“Ere many generations pass, our machinery will be driven by a power obtainable at any point in the universe. This idea is not novel…We find it in the delightful myth of Antheus, who derives power from the earth; we find it among subtle speculations of one of your splendid mathematicians.

Throughout space there is energy. Is this energy static, or kinetic? If static our hopes are in vain; if kinetic – and this we know it is, for certain – then it is a mere question of time when men will succeed in attaching their machinery to the very wheelwork of nature.” – Nikola Tesla (source)

There are also people that seem to be discovering what Tesla discovered.
Here are some related CE articles you may be interested in:

This is important. The technology we have to generate electricity in a clean, safe manner is truly limitless. It’s something we’ve written about and presented to the public here at Collective Evolution multiple times. It goes way beyond primitive ideas of using solar or wind as well.

The problem we have here is consciousness, red tape, and the power our current energy industry has over the global economy. Think about our world for a moment, is our consciousness truly ready for free, limitless energy? Or does the way we live still represent division, competition, and greed? Are we truly ready for a technology that will change everything about how we live?

In terms of red-tape and power, it’s an oil-based economy, and for years we’ve been asking/expecting them to make the transition towards clean energy. Only now are we seeing these giants divest in such technology. What took them so long? We’ve been sitting on clean natural ways to do things for a long time, and not in a way that would send us back to the stone ages.

Another big reason these technologies have “never seen the light of day” as Dr. Brian O’Leary, former NASA astronaut and physics professor once said, is because powerful corporations, who dictate government policy and oversee patent secrecy, stand so much to lose.

Those at the top, controlling our resources and running the show do not have our best interests at heart. Thankfully, something is happening, and awareness is growing. We are understanding who these people are and we are shifting our consciousness. From a very practical view, as awareness grows, more people invent these technologies and more people become aware of them.

But only when the human race is ready to accept the implications of such technology, which is spiritual in nature, will they truly come out. I don’t believe this will take too much longer, but we still have a ways to go. I am completely convinced that some technologies in this area are and will coincide with the recognization that we are more than just our body, and that matter is not the only reality…

“The day science begins to study non-physical phenomena, it will make more progress in one decade than in all the previous centuries of its existence” – Nikola Tesla 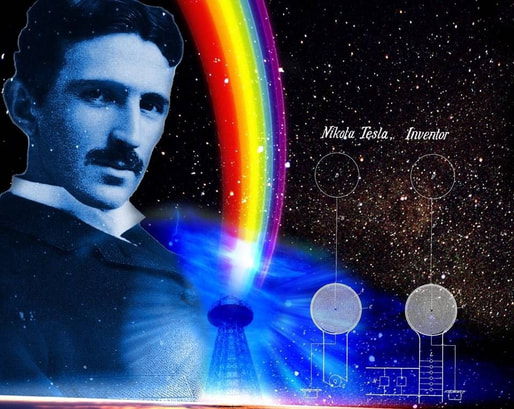 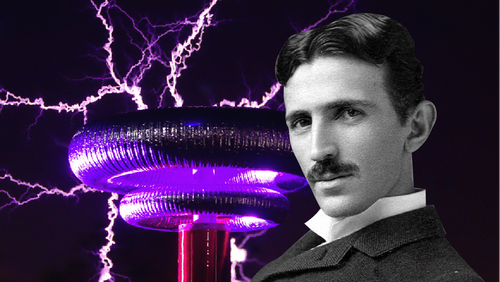