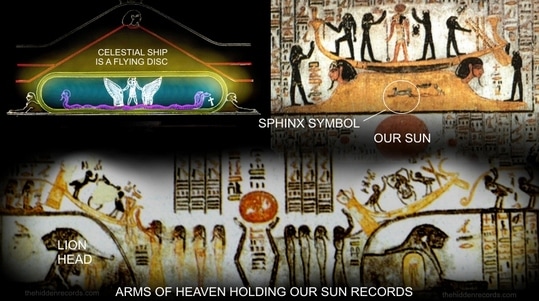 If this isn't enough evidence to launch my case well... then nothing is going to change the 'OFFICIAL DENIAL' PROTOCOL WITH THIS MATERIAL.

Two scholars have reviewed the material and one film-maker.

The two open minded scholars believe this gels... this is what changes everything. Its a big article updating some old material but when you see it all come together with the holy Grail and countdown to the return clues...
http://thehiddenrecords.com/egypt-celestial-ship-landing-sphinx-ufo-papyrus-pleiades.php 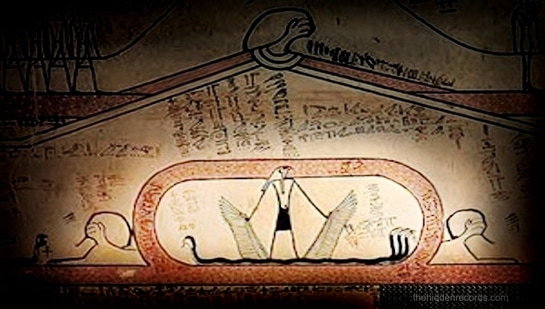 CELESTIAL SHIP LANDS ON THE SPHINX IN EGYPT?
The time has come for clarity. It begins with the papyrus seen above called theDjedkhonsuifeankh papyrus seen in the Egyptian museum. In simplicity it is the 'opening paragraph' of a very long papyrus stretching across the wall many feet long and it begins a sacred story of Zep Tepi, the first time in Egypt.

It is time to define with more clarity something that has been left untouched for some time. The obsession the ancient Egyptians had with their 'gods' who they said sailed down from the sky in 'strange ships'. You the reader must now decide if the ancient Egyptians lied or told a very emotional truth. You will be able to reason the validity of their 'controversial' cosmic claims against other cases first in Egypt, then in other ancient civilisations.

If you prefer cutting straight to the old video version rather than read the updated article, then here are the video links. The videos show a lot more than than article but they are 2010 and do not have all the breaking new updated findings seen in the images portrayed below.

As much as scholars feel quite nauseated by this repeating pattern of commonalities they are there for all to measure. Did they all tell the same lie or is it more closer to reality than some care to believe?

In 2010 I released a CNNiReport on this story and it set off a storm. It was attacked by two disinformation psy-ops agents and they attacked it daily with masses of well written abusive propoganda, lies and with an abusive smear campaign that the CNN admin had to intervene. Why was this such a sensitive issue? Read on and see for yourself.

The papyrus has the genesis tradition of Egypt with her personified as one holding all stars.

Nut is a sacred feminine creation Goddess who gives birth to a Sun...

A Sun that I insist is not OUR Sun at all but another where these 'gods', that are just beings of flesh and blood with 'magical looking' technology are where our ancestors originate.

She is shown stretching forth over the sky from horizon to horizon. Her toes touch the ground, and also touching her toes, it has the symbol for the Pleiades that is conclusive evidence now as the 'leg of the bull' symbol to show where the gods come from. Perhaps read this link first if the 'leg of the bull' symbol for the Pleiades sounds confusing because it is here in this Egypt Dendera link where the story of the 'Pleiades star gods' begins.

The papyrus shows what I will now prove is the Sphinx of Giza and the object shown which landed on the flat back of the Sphinx in the first epoch of Egypt over 5000 years ago. 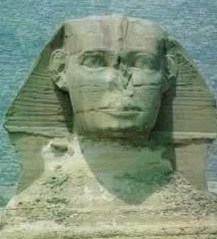 The Egyptian god Hu was one of the minor gods in some respects, but he was one of the most important gods for those serious about Egyptian deities. Hu is the power of the spoken word. He personifies the authority of utterance.

One legend has it that the creator and Sun God, Re (Ra), evolved from the primeval waters of Egypt. Once alive, Re created the air (Shu) and the moisture (Tefnut). Next, the earth god, Geb and the sky goddess, Nut were created. Mortal men and women were created from the tears of Re. Re then drew blood from his own penis and created the gods Hu and Sia. These two gods represented the creative power of the gods.

The act of the Sunboat traveling across the sky signifies that with each sunrise the world was created anew. Having traveled through the Underworld of night and making it past all the dangers therein, the Sunboat once again rises to confirm that life is created new each day. 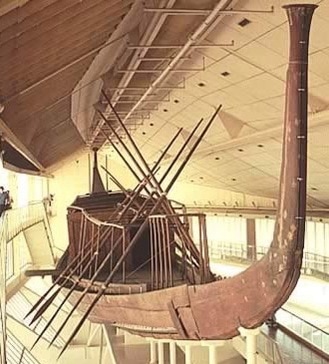 Hu was particularly important because he was the epitome of the power and command of the ruler. Even after death, Hu was of the utmost importance to the Kings of Ancient Egypt. Hu acted as the Kings companion as the King entered the Afterlife. Through Hu, the King maintained his royal authority in the Afterlife. Hu allowed the King to cross the waters of his canal and acknowledged the Kings authority and supremacy.

So far, we know Hu as the personification of Divine Utterance. However, some legends maintain that he was not just a part of creation, but that he was the creator. It is said that as Hu drew his first breath, there was in that sound the essence of his name. Hence, we have the name Hu, which sounds remarkably like the sound of an expelling breath.

With each breath Hu expelled, creation took place. The first breath created the Soul of Osiris. His last creation was the Sun. So it is said that Hu is the Word of God, the first and the last breaths, Hu Hu. 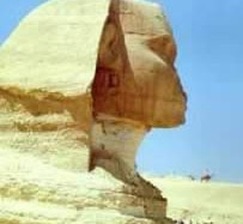 Its been suggested that Ancient Egyptians would use the Sphinx in a ritual that reenacted the creation of the Universe. It was performed at dusk, as night was falling upon Egypt. This was considered the time before creation begun, when Hu (the Sphinx) sat silent.

When the signal was given, the sound of the first word of creation filled the air, as people made the sound they recognized as that breath, Hhhooo.

This word, the Word of God, would be chanted all through the night symbolizing the night of progressive creating. The final act of the ritual came at sunrise. As the sun rose out of the East, the last breath of Hu was recognized.

Sri Harold Klemp, Spiritual Leader of Eckankar, notes, Hu is the ancient name of God, a love song to God. When Soul has heard this sound, Soul yearns to go home.

Eckankar uses the singing of Hus name as a spiritual connection to the Heart of God. They sing the name Hu to draw closer to the Divine Being. For the people who follow this faith, the desires are reported to be love, freedom, wisdom, and truth.

The Egyptian Book of the Dead, The Papyrus of Ani, mentions the ceremonies of Hu and Sa. One can only speculate as to the nature of such rituals and ceremonies. Could they be talking about the ancient ritual involving the Sphinx?

Hu may be considered a minor god in some ways, but its obvious that Hu was a not-so-minor god to most Ancient Egyptians.