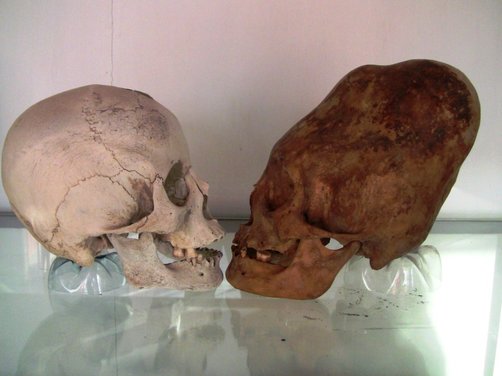 http://blog.world-mysteries.com/science/10-insane-ancient-achievements-that-science-cant-explain/
World Mysteries
Mystery is something not understood or beyond understanding,
whatever resists or defies explanation, profound, inexplicable,
or secretive quality, a religious truth that one can know only by revelation and cannot fully understand it.
http://www.world-mysteries.com/mpl_6.htm 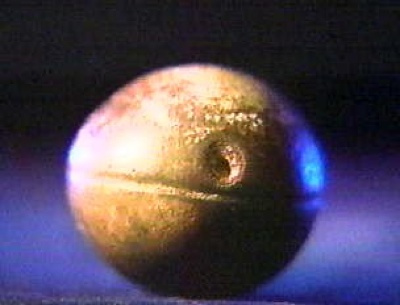 Over the last few decades, miners in South Africa have been digging up mysterious metal spheres. Origin unknown, these spheres measure approximately an inch or so in diameter, and some are etched with three parallel grooves running around the equator. Two types of spheres have been found: one is composed of a solid bluish metal with flecks of white; the other is hollowed out and filled with a spongy white substance. The kicker is that the rock in which they where found is Precambrian – and dated to 2.8 billion years old! Who made them and for what purpose is unknown. 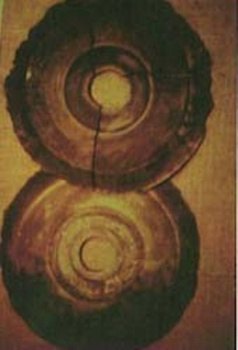 In 1938, an archaeological expedition led by Dr. Chi Pu Tei into the Baian-Kara-Ula mountains of China made an astonishing discovery in some caves that had apparently been occupied by some ancient culture. Buried in the dust of ages on the cave floor were hundreds of stone disks. Measuring about nine inches in diameter, each had a circle cut into the center and was etched with a spiral groove, making it look for all the world like some ancient phonograph record some 10,000 to 12,000 years old. The spiral groove, it turns out, is actually composed of tiny hieroglyphics that tell the incredible story of spaceships from some distant world that crash-landed in the mountains. The ships were piloted by people who called themselves the Dropa, and the remains of whose descendants, possibly, were found in the cave. 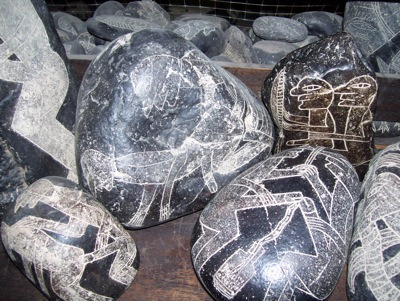 Beginning in the 1930s, the father of Dr. Javier Cabrera, Cultural Anthropologist for Ica, Peru, discovered many hundreds of ceremonial burial stones in the tombs of the ancient Incas. Dr. Cabrera, carrying on his father’s work, has collected more than 1,100 of these andesite stones, which are estimated to be between 500 and 1,500 years old and have become known collectively as the Ica Stones. The stones bear etchings, many of which are sexually graphic (which was common to the culture), some picture idols and others depict such practices as open-heart surgery and brain transplants. The most astonishing etchings, however, clearly represent dinosaurs – brontosaurs, triceratops (see photo), stegosaurus and pterosaurs. While sceptics consider the Ica Stones a hoax, their authenticity has neither been proved or disproved. 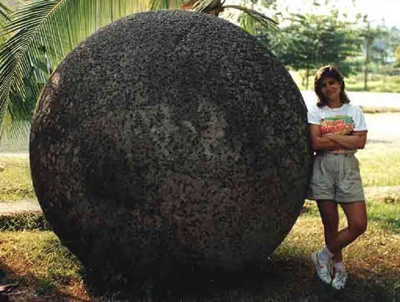 Workmen hacking and burning their way through the dense jungle of Costa Rica to clear an area for banana plantations in the 1930s stumbled upon some incredible objects: dozens of stone balls, many of which were perfectly spherical. They varied in size from as small as a tennis ball to an astonishing 8 feet in diameter and weighing 16 tons! Although the great stone balls are clearly man-made, it is unknown who made them, for what purpose and, most puzzling, how they achieved such spherical precision. 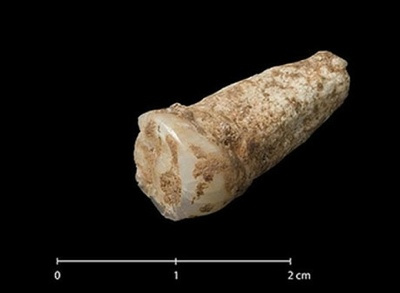 Fossils, as we learned in grade school, appear in rocks that were formed many thousands of years ago. Yet there are a number of fossils that just don’t make geological or historical sense. A fossil of a human hand print for example, was found in limestone estimated to be 110 million years old. What appears to be a fossilized human finger found in the Canadian Arctic also dates back 100 to 110 million years ago. And what appears to be the fossil of a human footprint, possibly wearing a sandal, was found near Delta, Utah in a shale deposit estimated to be 300 million to 600 million years old. 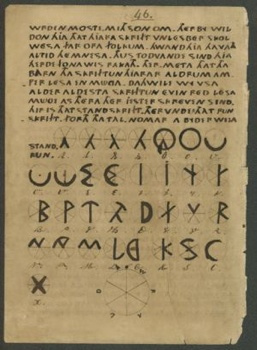 The Oera Linda Book is a controversial Frisian manuscript covering historical, mythological, and religious themes that first came to light in the 19th century. Themes running through the Oera Linda Book include catastrophism, nationalism, matriarchy, and mythology. The text alleges that Europe and other lands were, for most of their history, ruled by a succession of folk-mothers presiding over a hierarchical order of celibate priestesses dedicated to the goddess Frya, daughter of the supreme god Wr-alda and Irtha, the earth mother. The claim is also made that this Frisian civilization possessed an alphabet which was the ancestor of Greek and Phoenician alphabets. The current manuscript carries a date of 1256. Internal claims suggest that it is a copy of older manuscripts that, if genuine, would have been written by multiple people between 2194 BC and AD 803. [Source] 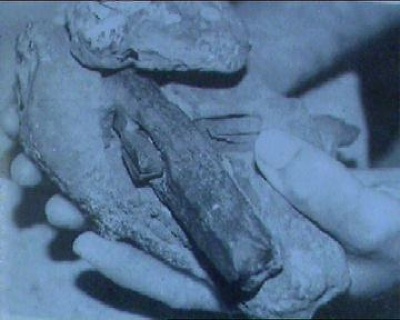 Humans were not even around 65 million years ago, never mind people who could work metal. So then how does science explain semi-ovoid metallic tubes dug out of 65-million-year-old Cretaceous chalk in France? In 1885, a block of coal was broken open to find a metal cube obviously worked by intelligent hands. In 1912, employees at an electric plant broke apart a large chunk of coal out of which fell an iron pot! A nail was found embedded in a sandstone block from the Mesozoic Era. And there are many, many more such anomalies. 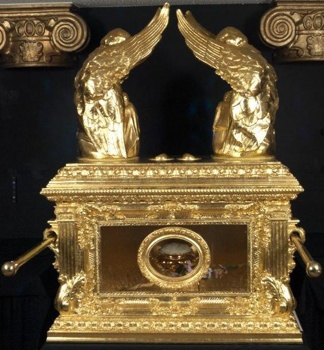 Ark Of The Covenant

The Ark is considered the greatest of all hidden treasures and its discovery would provide indisputable truth that the Old Testament is hard fact. Its recovery remains the goal of every modern archaeologist and adventurer. Its purpose was as a container for the ten commandments given on stone tablets by God to Moses on Mount Sinai. According to the book of Exodus, the Ark is made of shittim wood (similar to acacia) and gold-covered inside and out. It was topped by a mercy seat comprising two cherubs also made of gold. It was believed to have supernatural powers due to several events, including causing the death of a man, who attempted to steady the Ark as the oxen hauling it stumbled, bringing down the walls of Jericho in one battle, and showering misfortune on the Philistines after they captured it in another. There are several speculations around the final resting place of the Ark, and whilst it would take a shrewd operator to find it, it would need a brave or even foolhardy person to open it! 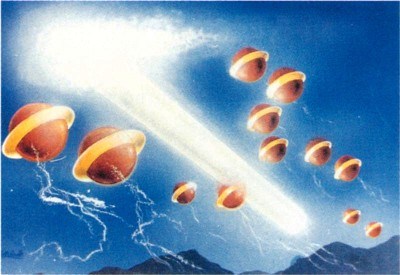 Angel Hair is a rare phenomenon that has so far defied explanation. It is made up of silken threads that rain down on to the earth, but reach out to touch it and it will almost certainly vanish before your eyes. It is a world wide phenomenon with the most regular occurrences from North America, New Zealand, Australia, and western Europe. There is no known proof for what causes this substance, or even what it is made up of. Speculations are that it has come from Spiders or another type of silk-spinning insect, and even UFO’s as it has often been associated with UFO sightings. Because of its sensitive nature, it has been difficult to collect, and to analyse as it is subject to contamination from car exhaust fumes, and even human contact, which could skew the chemical results. 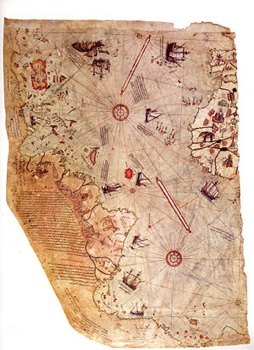 The Piri Reis Map is a famous pre-modern world map created by 16th century Ottoman-Turkish admiral and cartographer Piri Reis. The map shows part of the western coasts of Europe and North Africa with reasonable accuracy, and the coast of Brazil is also easily recognizable. Various Atlantic islands including the Azores and Canary Islands are depicted, as is the mythical island of Antillia. The map is noteworthy for its depiction of a southern landmass that some controversially claim is evidence for early awareness of the existence of Antarctica. Some scholars claim this and other maps support a theory of global exploration by a pre-classical undiscovered civilization. [Source]

Additional text for this article is courtesy of The Skeptical News. 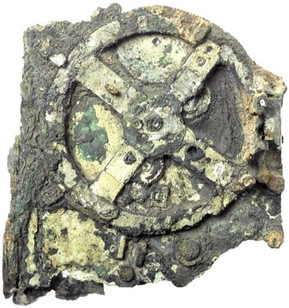 A perplexing artifact was recovered by sponge-divers from a shipwreck in 1900 off the coast of Antikythera, a small island that lies northwest of Crete. The divers brought up from the wreck a great many marble and and bronze statues that had apparently been the ship's cargo. Among the findings was a hunk of corroded bronze that contained some kind of mechanism composed of many gears and wheels. Writing on the case indicated that it was made in 80 B.C., and many experts at first thought it was an astrolabe, an astronomer's tool. An X-Ray of the mechanism, however, revealed it to be far more complex, containing a sophisticated system of differential gears. Gearing of this complexity was not known to exist until 1575! It is still unknown who constructed this amazing instrument 2,000 years ago or how the technology was lost. 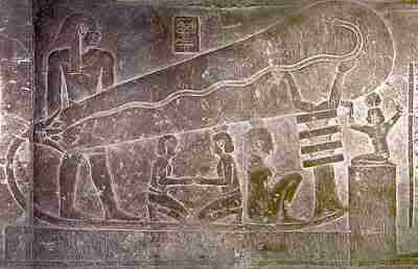 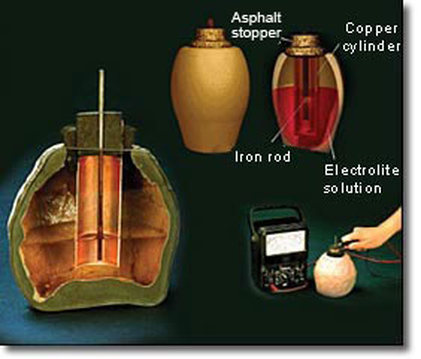 Today batteries can be found in any grocery, drug, convenience and department store you come across. Well, here's a battery that's 2,000 years old! Known as the Baghdad Battery, this curiosity was found in the ruins of a Parthian village believed to date back to between 248 B.C. and 226 A.D. The device consists of a 5-1/2-inch high clay vessel inside of which was a copper cylinder held in place by asphalt, and inside of that was an oxidized iron rod. Experts who examined it concluded that the device needed only to be filled with an acid or alkaline liquid to produce an electric charge. It is believed that this ancient battery might have been used for electroplating objects with gold. If so, how was this technology lost... and the battery not rediscovered for another 1,800 years? 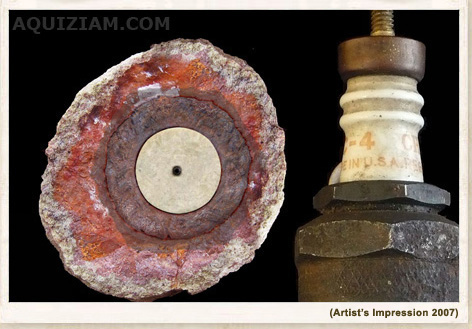 While mineral hunting in the mountains of California near Olancha during the winter of 1961, Wallace Lane, Virginia Maxey and Mike Mikesell found a rock, among many others, that they thought was a geode - a good addition for their gem shop. Upon cutting it open, however, Mikesell found an object inside that seemed to be made of white porcelain. In the center was a shaft of shiny metal. Experts estimated that it should have taken about 500,000 years for this fossil-encrusted nodule to form, yet the object inside was obviously of sophisticated human manufacture. Further investigation revealed that the porcelain was surround by a hexagonal casing, and an X-Ray revealed a tiny spring at one end. Some who have examined the evidence say it looks very much like a modern-day spark plug. How did it get inside a 500,000-year-old rock? 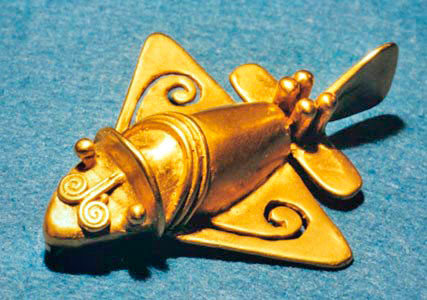 There are artifacts belonging to ancient Egyptian and Central American cultures that look amazingly like modern-day aircraft. The Egyptian artifact, found in a tomb at Saqquara, Egypt in 1898, is a six-inch wooden object that strongly resembles a model airplane, with fuselage, wings and tail. Experts believe the object is so aerodynamic that it is actually able to glide. The small object discovered in Central America (shown at right), and estimated to be 1,000 years old, is made of gold and could easily be mistaken for a model of a delta-wing aircraft - or even the Space Shuttle. It even features what looks like a pilot's seat. 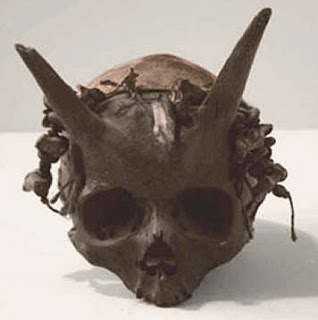 Several human skulls with horns protruding from them were discovered in a burial mound at Sayre, Bradford County, Pennsylvania, in the 1880′s. With the exception of the bony projections located about two inches above the eyebrows, the men whom these skeletons belonged to were anatomically normal, although at seven feet tall they were considered to be giants. Burial was believed to have been in the neighborhood of 1200 AD.

Back in the 1880s, a burial mound was discovered near Sayre at a place called Spanish Hill. But instead of Indian bodies, W.K. Morehead, Dr. G.P. Donehoo and A.B. Skinner of Philadelphia’s American Investigating Museum dug out skeletons. They were reported to be seven feet tall with 4″ horns protruding from their brows. The apparitions of the creatures have also been reportedly seen roaming the area. The bones were supposedly dated back to 1200 AD. They were sent to the Philadelphia museum, where according to legend they disappeared.

The Most Epic UFO Video Compilation Ever Of All Time X Infinity!
https://www.youtube.com/watch?v=q5aRH...