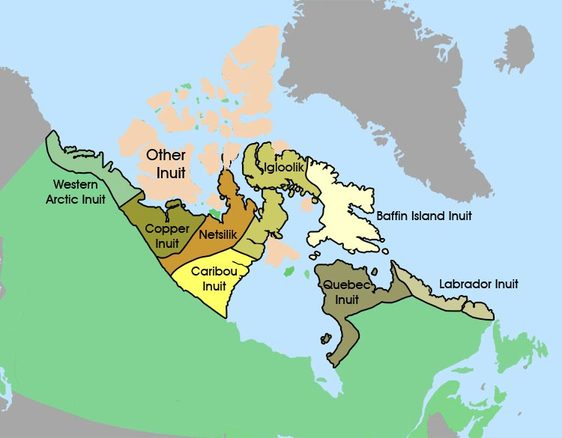 The Inuit Tribe are indigenous people who live in the Canadian Arctic, Greenland, Siberia and Alaska. Their elders have written to the National Space and Aeronautics Administration (NASA) to tell them that the earth's axis has shifted. The elders do not believe that carbon emissions from humans are causing the current climate changes.

The sky has changed, claim Inuit eldersThe Inuit elders note climate change in the melting glaciers, deterioration of sealskin, and burns on seals, and disappearing sea ice. The attribute these changes in climate to changes in the sky.The tribal elders claim that the sun no longer rises where it used to rise.

The days heat up more quickly and last longer. The stars and moon are also in different places in the sky and this affects the temperatures. This is a population that relies on the placement of the moon and stars for their survival as they live in total darkness during part of the year.

The elders say they can no longer predict the weather, as they have been able to in the past. They observe that warmer winds are changing the snow banks, making their ability to navigate overland more difficult. Polar bear populations are increasing, which causes the bears to wander into the Inuit neighborhoods.

On April 20, 2011, CNN News reported that an earthquake moved the main island of Japan by 8 feet and shifted the Earth on its axis. They quoted Kenneth Hudnut, a geophysicist with the U.S. Geological Survey, as saying, "At this point, we know that one GPS station moved (8 feet), and we have seen a map from GSI (Geospatial Information Authority) in Japan showing the pattern of shift over a large area is consistent with about that much shift of the land mass."

They quoted the National Institute of Geophysics and Volcanology in Italy, that estimated that "the 8.9-magnitude quake shifted the planet on its axis by nearly 4 inches (10 centimeters)." Astronomers concur that there has not been a shift in the earth's rotational axis, but that there have been subtle polar shifts over the last ten years. This is a change in what is called the figure axis.

These changes are caused by continental drift, which has been shifting the location of the North Pole towards the south about 10 cms per year for the last 100 years. Teams at the University of Texas using NASA's GRACE satellite found that the North Pole's normal drifting to the south changed in 2005 and since then, the drift has been eastward. They detected a 1.2 meter change from 2005 to 2013. They conclude that the shift is caused by climate change caused by global warming.

About the Inuit or Eskimo people

The Inuit people inhabit the far northern reaches of the Canadian Arctic and have done so for centuries. The area they inhabit is almost continually frozen under a layer of permafrost. For months at a time, their days begin and end in darkness. A nomadic people, they built tents or teepees of caribou skin in warmer months, and lived in igloos in the winter. Previously, they were known as Eskimo.

The word Eskimo is from a word in their language that means "eater of raw meat." This group of Arctic dwellers has now been renamed Inuit, a word that means "the people." Inuk is the word to describe one member of the tribe, or "one person." The Inuit speak many different dialects that all stem from the Eskimaleut or Inuit-Aleut language.

They are primarily hunters, relying on Arctic wildlife for their survival. They fish, hunt sea mammals, such as seals and walrus, and land mammals, like Arctic hare and caribou and use seal skin and blubber for clothing, tents, and fuel. Most of their diet is made up of raw meat as there is very little plant life in their environment.

Earth has already shifted about 1200 miles to the south in the summer & an equal amount north in the Winter based on the position of the sun at sunrise & sunset on the summer solstice. At some point, the Earth will slip onto its side on the equator which is heaviest and the largest circumference. Unlike some theories, the Earth will not upside down because it is top light & does not have enough  weight to invert. We would have been better off inverted than on our side with the poles horizontal  but we have insufficient Arctic weight to complete the inversion.

Examples of our current change in axis tilt and our future sideways orientation  are shown below. Keeping in mind, that once the polar regions are horizontal, as we orbit the sun, the equator will face the sun for 3 months, twice a year for seasons #1 and #3. Of the other 2 seasons, one pole will face the sun for 3 months (constant sunlight & constant heat 24/7, season #2) while the other faces away from the sun (constant darkness & constant freezing 24/7, season), then the poles will reverse position during the opposite season #4. We can survive seasons #1 & 3 but the only way to survive seasons #2 and 4 would be to live underground or at the equator. 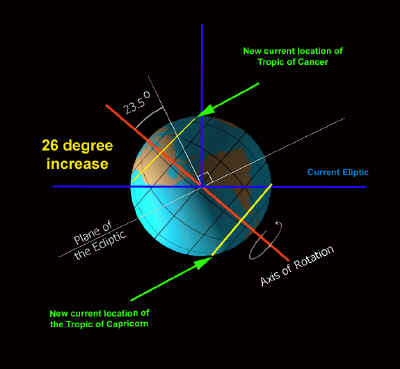 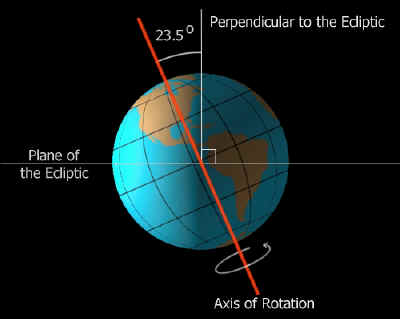 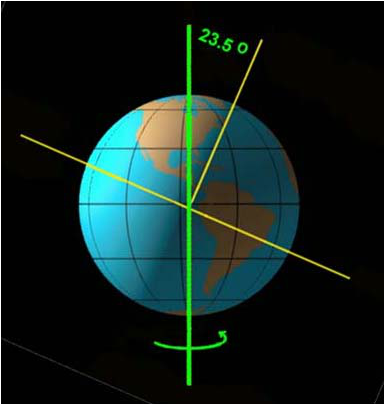 with normal rotation left to right 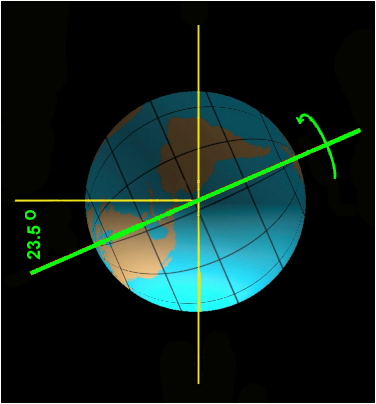 90 degree axis shift onto side 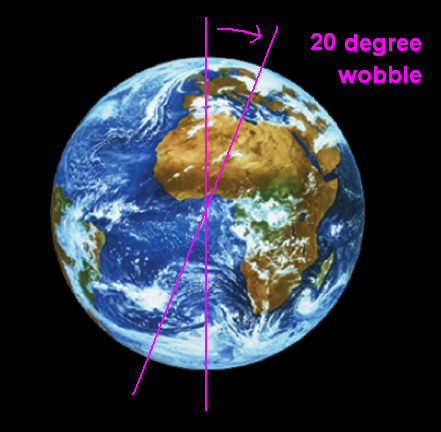