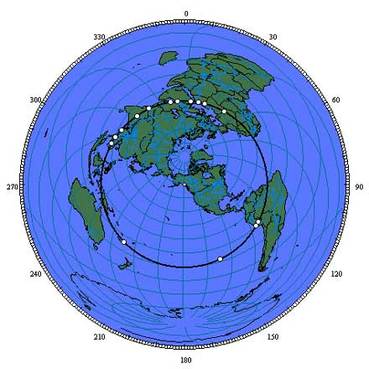 Many ancient ruins demonstrate that the people who constructed them had not only a special regard for celestial bodies and mathematics, but also a spot-on accuracy. From Egypt to Mexico, there is no doubt that past civilizations were involved in incredibly complex space calculations, mathematics and architectural endeavours. Although many historians and archaeologists debate exactly what these civilizations did intentionally and what they did by mere chance, here are a few examples of how ancient architecture was created with mathematics and the cosmos in mind.../  continue in the article way down below.


Links by the "Ancient Quest":

Many ancient ruins demonstrate that the people who constructed them had not only a special regard for celestial bodies and mathematics, but also a spot-on accuracy. From Egypt to Mexico, there is no doubt that past civilizations were involved in incredibly complex space calculations, mathematics and architectural endeavours. Although many historians and archaeologists debate exactly what these civilizations did intentionally and what they did by mere chance, here are a few examples of how ancient architecture was created with mathematics and the cosmos in mind...

In Giza there are many examples of attention to spatial coordinates. For instance, the Great Pyramid’s faces are aligned with the four cardinal directions almost perfectly. In fact, they are less than 0.2 of a degree off. The pyramid is very precise, with the corners as little as two seconds of a degree (with 60 seconds in a minute of a degree, and 60 minutes in a degree) off of a 90-degree angle. In addition to this (although contested), the pyramids at Giza seem to match the stars of Orion’s belt with a certain precision.

The Site of Teotihuacan, “The Pyramid of the Sun,” as it has been dubbed, demonstrates advanced math. The pyramid’s base has a perimeter of 2932.8 feet, while the pyramid has a height of about 233.5 feet. If we take the ratio of base to height, we get about 12.56, or rather, 4p. Although to some this is thought to be a coincidence, the pyramid’s actual ratio is less than 0.05 per cent off of the true value for 4p.

The ancient Mayan site of Chichen Itza exemplifies the culture’s celestial orientation. The huge step pyramid (the pyramid of Kukulcan) that is the focus of the site has 91 steps on each of its sides, which add up to 364 steps. Adding the platform on top, there are 365 steps in total — the number of days in a year. Also, on the vernal and autumnal equinoxes (the first day of spring and fall, when day and night are the same length of time), the sunlight works to create a shadow of a giant serpent on the staircase that faces north.


A building called the Caracol, believed to have served as an observatory, is also found at the site of Chichen Itza. The windows are set up to align with certain points of interest. Although the top is damaged, remaining windows point to the northern- and southern-most positions of Venus, the position of sunset on the Equinoxes, and the corners of the building itself point to the sunrises and sets of the solstices.

The Mayans had a sophisticated calendar, losing only one day in 6000 years. Their predictions of solar and lunar eclipses were incredibly accurate. As many have heard, they predicted a date that they believed would be the end of the world. This date, translated to our calendar, is on December 23, 2012. Although unlikely, the world is predicted to suddenly end in about seven years (if we have just translated the meaning of their calendar correctly).

The Mayans did have some rationale behind this number. This date marks the time in the precessional cycle of the earth that we will move out of the constellation of Pisces and on to the age of Aquarius.

What is global precession? I’m glad you asked. Everyone knows that the earth spins on its axis while it revolves around the sun. Most remember from grade 10 science class that the earth’s axis is not perfectly vertical, but rather tilted about 23.5 degrees. However, the axis is not always this way, as it slowly varies from about 24.5 degrees to 22.1 degrees, making a complete cycle every 41,000 years.

While it is moving in this way, due to varying gravitational forces, the axis wobbles (precesses) in a clockwise circle. Just imagine the way the axis of a top spins as it begins to fall. So, the angle of the earth stays the same (or somewhere within its three degree variance), but the direction in which it points changes. For example, our current North Star is Polaris (or Ursae Minoris), as the North Pole points towards this star. However, approximately 13,000 years ago, the North Pole would have pointed towards the star Vega, as it will do again in about another 13,000 years. It takes about 25,776 years to complete one precessional cycle.

Anyone ever heard of the song “Age of Aquarius”? Well, this is in reference to the earth’s precessional cycle. Presently we are in the age of Pisces, which means that when the sun rises on the vernal equinox it rises in the direction that the constellation of Pisces is in the sky. However, due to precession, every 2160 years on the vernal equinox the sun rises in a different constellation. As mentioned above, we will be moving out of the age of Pisces and into the age of Aquarius around the end of 2012.

So, the Mayans figured there was something important to the changing of ages, hence their predicted death date. However, they are not the only ones who seem to have taken certain numbers into account. The perimeter of the Great Pyramid at Giza is approximately 3,023 feet and the height is 481 feet. In addition to exemplifying a ratio of exactly 2p, its measurements are said to possibly represent the Northern Hemisphere of the earth, on a scale of 1 : 43,200. Though controversial, some interpret this number as exactly 20 times the precessional number of 2160, representing the precession of the earth through 20 different zodiac constellations or ‘ages.’

These examples of precessional numbers, mathematics and celestial orientations found in ancient structures by no means scratch the surface of all of the occurrences (or at least, proposed occurrences) present at various historical sites, and even in cultural songs and myths. Whether or not various theories or speculations concerning these spectacular constructions are true or not (and we may never know), the meticulous precision that was put into planning, calculating and building them is hard to ignore, not to mention awe-inspiring.
Links