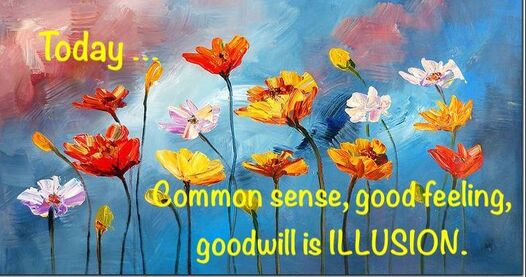 The truth today is punishable, ...

Pedophilia is a forbidden subject,
​because it is practiced by high government officers.

From communism to capitalism,
from capitalism to globalism.

Slaves can be found anywhere ... however,
slavery is easier than freedom.

Where there are a lot of stupid people …
the others will be influenced with their stupidity …
and pretty soon reality is getting more and more squeezed out.

God is the MONEY today,
apostle is the LIER,
the sacraments are THEFT.

Nightmares are reality, facts are imagination.
Terrorism is self-defense, lifestyle is destruction.
​
✴︎
Joe Biden is now the leader of the USA ...

why not  ... we have a country of people that do not want freedom,

the only things they want Federal Reserve Notes ... but not FREEDOM ...

so the Globalist appointed Joe Biden!

✴︎
✴︎
Joe Biden, 76, is a former vice president in the Obama administration

​Now the President of the United States.

Baxter Dmitry reports for Newspunch, April 3, 2019, that according to Paul Tatchell,

​a roommate of Joe Biden at the Syracuse University College of Law,

​Biden admitted he was sexually attracted to children.