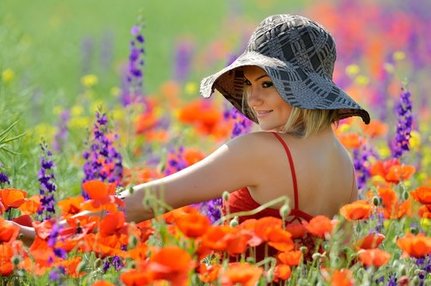 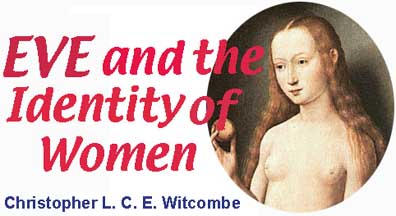 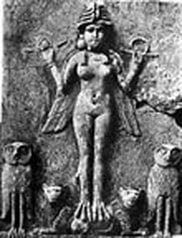 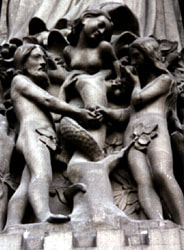 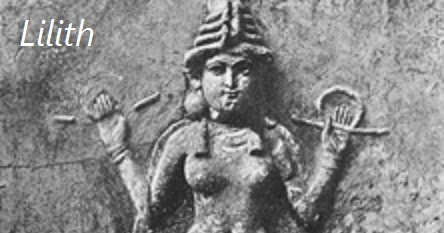 Hebraic traditional works state that Adam married Lilith (before he married Eve), but she would not sexually submit to him, desiring to be the one above (on top) when they had sex, Adam not allowing this. She flew away from Eden to the Red Sea.

​God sent angels to bring Lilith back to Eden, but she refused to return. She supposedly mated with a demon and gave birth to his children. These offspring were the Lilim, Lamiae, Empusae or Succubae. This story has been scrapped from the bible and torah by the Vatican around the year 1420 along with approximately 130 other stories/books.

In an effort to explain inconsistencies

in the Old Testament, there developed in Jewish literature a complex interpretive system called the midrash which attempts to reconcile biblical contradictions and bring new meaning to the scriptural text.

Employing both a philological method and often an ingenious imagination, midrashic writings, which reached their height in the 2nd century CE, influenced later Christian interpretations of the Bible. Inconsistencies in the story of Genesis, especially the two separate accounts of creation, received particular attention. Later, beginning in the 13th century CE, such questions were also taken up in Jewish mystical literature known as the Kabbalah.

According to midrashic literature, Adam's first wife was not Eve but a woman named Lilith, who was created in the first Genesis account. Only when Lilith rebelled and abandoned Adam did God create Eve, in the second account, as a replacement. In an important 13th century Kabbalah text, the Sefer ha-Zohar ("The Book of Splendour") written by the Spaniard Moses de Leon (c. 1240-1305), it is explained that:


In the Alpha Betha of Ben Sira (Alphabetum Siracidis, or Sepher Ben Sira), an anonymous collection of midrashic proverbs probably compiled in the 11th century C.E., it is explained more explicitly that the conflict arose because Adam, as a way of asserting his authority over Lilith, insisted that she lie beneath him during sexual intercourse (23 A-B).

Lilith, however, considering herself to be Adam's equal, refused, and after pronouncing the Ineffable Name (i.e. the magic name of God) flew off into the air.

Adam, distraught and no doubt also angered by her insolent behaviour, wanted her back. On Adam's request, God sent three angels, named Senoy, Sansenoy, and Semangelof, who found her in the Red Sea.

Despite the threat from the three angels that if she didn't return to Adam one hundred of her sons would die every day, she refused, claiming that she was created expressly to harm newborn infants. However, she did swear that she would not harm any infant wearing an amulet with the images and/or names of the three angels on it.

At this point, the legend of Lilith as the "first Eve" merges with the earlier legend of Sumero-Babylonian origin, dating from around 3,500 BCE, of Lilith as a winged female demon who kills infants and endangers women in childbirth. In this role, she was one of several mazakim or "harmful spirits" known from incantation formulas preserved in Assyrian, Hebrew, and Canaanite inscriptions intended to protect against them.

As a female demon, she is closely related to Lamashtu whose evilness included killing children, drinking the blood of men, and eating their flesh. Lamashtu also caused pregnant women to miscarry, disturbed sleep and brought nightmares.

In turn, Lamashtu is like another demonized female called Lamia, a Libyan serpent goddess, whose name is probably a Greek variant of Lamashtu. Like Lamashtu, Lamia also killed children. In the guise of a beautiful woman, she also seduced young men. In the Latin Vulgate Bible, Lamia is given as the translation of the Hebrew Lilith (and in other translations it is given as "screech owl" and "night monster").

It needs to be remembered that these demonic "women" are essentially personifications of unseen forces invented to account for otherwise inexplicable events and phenomena which occur in the real world. Lilith, Lamashtu, Lamia and other female demons like them are all associated with the death of children and especially with the death of newborn infants.

It may be easily imagined that they were held accountable for such things as Sudden Infant Death Syndrome (SIDS, also called crib death, or cot death) where an apparently healthy infant dies for no obvious reason. Cot death occurs almost always during sleep at night and is the most common cause of death of infants. Its cause still remains unknown.

By inventing evil spirits like Lilith, Lamashtu, and Lamia, parents were not only able to identify the enemy but also to know what they had to guard against. Amulets with the names of the three angels were intended to protect against the power of Lilith.

Lilith also personified licentiousness and lust. In the Christian Middle Ages she, or her female offspring, the lilim, became identified with succubae (the female counterparts of incubi) who would copulate with men in their sleep, causing them to have nocturnal emissions or "wet dreams."

Again, Lilith and her kind serve as a way of accounting for an otherwise inexplicable phenomenon among men. Today, 85 percent of all men experience "wet dreams" (the ejaculation of sperm while asleep) at some time in their lives, mostly during their teens and twenties and as often as once a month. In the Middle Ages, celibate monks would attempt to guard against these nocturnal visits by the lilith/succubus by sleeping with their hands crossed over their genitals and holding a crucifix.

Through the literature of the Kabbalah, Lilith became fixed in Jewish demonology where her primary role is that of strangler of children and a seducer of men. The Kabbalah further enhanced her demonic character by making her the partner of Samael (i.e. Satan) and queen of the realm of the forces of evil.

In this guise, she appears as the antagonistic negative counterpart of the Shekhinah ("Divine Presence"), the mother of the House of Israel. The Zohar repeatedly contrasts Lilith the unholy whorish woman with the Shekhinah as the holy, noble, and capable woman. In much the same way, Eve the disobedient, lustful sinner is contrasted with the obedient and holy Virgin Mary in Christian literature.

Through her couplings with the devil (or with Adam, as his succubus), Lilith gave birth to one hundred demonic children a day (the one hundred children threatened with death by the three angels). In this way, Lilith was held responsible for populating the world with evil.

If you ask how Lilith herself, the first wife of Adam, became evil, the answer lies in her insubordination to her husband Adam. It is her independence from Adam, her position beyond the control of a male, that makes her "evil."

She is disobedient and like Eve, and indeed all women who are willful, she is perceived as posing a constant threat to the divinely ordered state of affairs defined by men.
Lilith is represented as a powerfully sexual woman against whom men and babies felt they had few defenses and, except for a few amulets, little protection. Much more so than Eve, Lilith is the personification female sexuality.

Her legend serves to demonstrate how, when unchecked, female sexuality is disruptive and destructive. Lilith highlights how women, beginning with Eve, use their sexuality to seduce men.

​She provides thereby a necessary sexual dimension, which is otherwise lacking, to the Genesis story which, when read in literal terms, portrays Eve not as some wicked femme fatale but as a naive and largely sexless fool. Only as a Lilith-like character could Eve be seen as a calculating, evil, seductress.

Lilith is referred to only once in the Old Testament. In the Darby translation of Isaiah 34:14 the original Hebrew word is rendered as "lilith"; according to Isaiah, when God's vengeance has turned the land into a wilderness, "there shall the beasts of the desert meet with the jackals, and the wild goat shall cry to his fellow; the lilith also shall settle there, and find for herself a place of rest." The same word is translated elsewhere, however, as "screech owl, "night creatures," "night monsters," and "night hag."

Although it has been suggested that the association with night stems from a similarity between the Sumero-Babylonian demon Lilitu and the Hebrew word laylahmeaning "night," Lilith nonetheless seems to have been otherwise associated with darkness and night as a time of fear, vulnerability, and evil.

In her demonized form, Lilith is a frightening and threatening creature. Much more so than Eve, she personifies the real (sexual) power women exercise over men.

She represents the deeper, darker fear men have of women and female sexuality.

Inasmuch as female sexuality, as a result of this fear, has been repressed and subjected to the severest controls in Western patriarchal society, so too has the figure of Lilith been kept hidden.

However, she lurks as a powerful unidentified presence, an unspoken name, in the minds of biblical commentators for whom Eve and Lilith become inextricably intertwined and blended into one person. Importantly, it is this Eve/Lilith amalgam which is used to identify women as the true source of evil in the world.

In the Apocryphal Testament of Reuben (one of the Testaments of the Twelve Patriarchs, ostensibly the twelve sons of Jacob), for example, it is explained that:


References to Lilith in the Talmud describe her as a night demon with long hair (B. Erubin 100b) and as having a human likeness but with wings (B. Nidda 24b). In Rabbi Isaac ben Jacob ha-Kohen's "Treatise on the Emanations on the Left," written in Spain in the 13th century, she is described as having the form of a beautiful woman from her head to her waist, and "burning fire" from her waist down. Elsewhere, Rabbi Isaac equates her with the primordial serpent Leviathan.

A Babylonian terra-cotta relief dated to around 2000 BCE in the collection of Colonel Norman Corville has been identified as a representation of Lilith (the identification has been questioned by a number of scholars).

The relief shows a nude woman with wings and a bird's taloned feet. She wears a hat composed of four pairs of horns and holds in each upraised hand a combined ring and rod (similar to an Egyptian shen ring amulet). She stands on two reclining lions and is flanked by owls.

Despite the fact that she is not officially recognized in the Christian tradition, in the Late Middle Ages she is occasionally identified with the serpent in Genesis 3 and shown accordingly with a woman's head and torso.

​For example, the bare-breasted woman with a snake's lower parts posed seductively in the branches of the tree between Adam and Eve in the scene of the temptation carved into the base of the trumeau in the left doorway of the West façade of the Cathedral of Notre Dame in Paris has been identified as Lilith.​  / See pictures above. 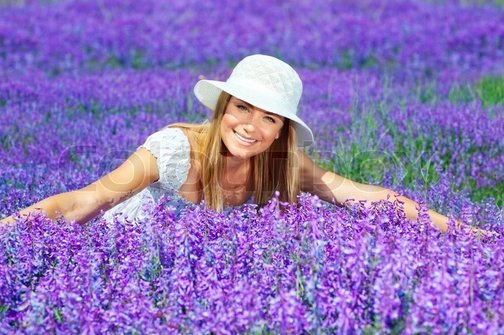